Monday we talked about Dubrovnik , the seeming polar opposite of Sarajevo, the capital and largest city in Bosnia and Herzegovina. Dubrovnik struggles to modernize and become a smart city, while protecting its pristine seventh century spirit, while Sarajevo tries to build a smart city from rubble. They may make for strange bedfellows, but these two cities with seemingly different problems are working together to build connected cities that solve their citizens’ problems.

As we mentioned previously, Dubrovnik is a geographic anomaly, cut off from the rest of Croatia and the E.U. by a small strip of land giving Bosnia access to the coast, Sarajevo is as close a neighbor as other Croatian cities. This could be a reason for the two countries to partner, or it could simply be that, while no two cities are the same, all smart cities share the same constraints of finance, technical debt and inertia stalling innovation.

And with both Dubrovnik and Sarajevo, the secret to smart cities is found in the youth. 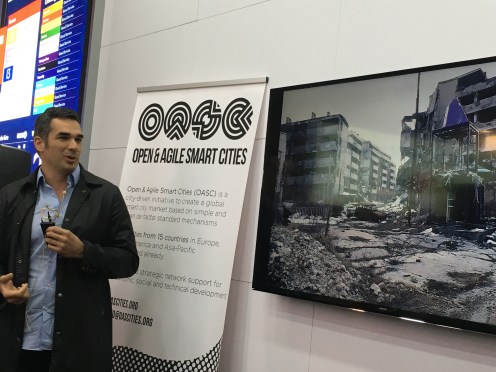 Ceco Gakovic was born in Sarajevo, but spent most of his life in San Francisco before returning to his home country to found CityOS, an operating system for smart cities. For him, there are three major steps to take his city ravaged by war from ruins to world-leading:

Like their sister city, hackathons have become a way to address all three of these steps. This year the 48-hour CityOS Hackathon had 150 individuals competing, resulting in 32 functional apps and ten companies created all creating solutions in the smart city space.

One of the most interesting things developed on the Sarajevo CityOS is the city’s lighting system. LED lighting posts are reactive, dimming and brightening as crowds require, limiting a crowded city’s inevitable light pollution.

But these aren’t just simple lights, but they are also data points packed with sensors for air pollution. “This is what a sunny day in Sarajevo looks like,” Gakovic said at the Smart City Expo, pointing to a photo almost entirely of smog, one of the biggest problems Sarajevo has to tackle is its air pollution. With a mix of hardware and IBM, Apple and Arduino, they are able to measure it because, particularly in the smart city, if you can’t measure it, you can’t even begin to fix it.

Another app spawned in these two days is a smart furnace app which uses high-precision temperature sensing devices, maintaining the right temperatures, which keeps heating bills lower and lessens the air contamination. And, of course, the simplest way to help air pollution is with better traffic management, something apps can really help overcome inexpensively. OnTime uses app users’ smartphones to monitor traffic patterns and public transit options all at once, to inform passengers the details of public transit options versus driving ones, hopefully informing users of the timely benefits of choosing public transit over driving and to do a strong push toward carsharing and carpooling in this city that just needs fewer cars on the road. Similarly, the Smart Parking Sensor saves patience and gas for people driving around and around looking for a space.

In just 48 hours, these and many more solutions were born.

What about your city? Do you know of smart cities that are harnessing youth and innovation to rapidly connect and evolve? Tell us below!

This is the second piece of a two parts issue. Read the first one here.