A study submitted by the Californian company indicates that the hyperloop from Stockholm to Helsinki would make the journey in 28 minutes.

By plane, the cities of Stockholm in Sweden and Helsinki in Finland, are separated by 55 minutes of flight. If we add to this the duration of the journey to the airport of departure and the one you have to make from the point of arrival to the city centre, going from one capital to the other can easily take three and a half hours. The Hyperloop One company, which is experimenting with the now famous new means of transport based on capsules in a vacuum, has stated that with their technology the journey would be completed in 28 minutes.

A study submitted by the Californian company has proposed this project aimed at linking the two Scandinavian capitals, detailing costs, needs and benefits. It would mean building a large vacuum tunnel connecting the two cities, which are more than 400 kilometres apart.

A part of the structure would be built on large pillars to support it above the surface of the water, while for the rest of the journey, it would be necessary to make a tunnel under the seabed. The study indicates out that it would take 12 years to complete the hyperloop from Stockholm to Helsinki. 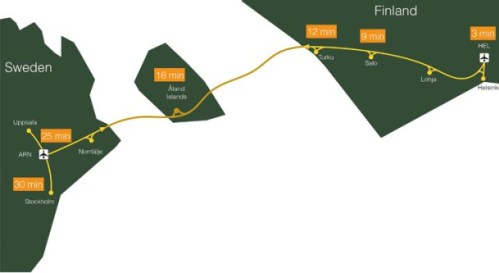 Hyperloop One recently talked about the possibility of building this means of transport between the city of Moscow and China, in a very ambitious project which is still up in the air, since the technology has not even been tested. Although it is true that the Californian company successfully conducted a propulsion which demonstrates the feasibility of the technology.

With regard to the project to link Stockholm and Helsinki, the study put forward by Hyperloop One, prepared by FS links and KPMG, speaks of a cost of 19 billion euros, which would include 3 billion to build what would be the longest tunnel in the world, under the Baltic Sea.

The economic viability of the project has been supported by highlighting that the houses which would be near the eventual hyperloop departure and arrival stations would increase in value. Shipments of goods would arrive sooner and people would take less time travelling from one city to the other. The two capitals share a lot, and one of the things they share is workers. There are many people who have to travel on business or simply part of the time they have to work in the other capital.

The hyperloop from Stockholm to Helsinki would make this toing and froing easier. The study estimates that the new transport system could generate between 875 million and 1 billion euros a year in ticket sales. The estimated annual number of passengers would be 42.7 million. Given this revenue and the economic benefits locally, the investment would be amortised in a decade.