Despite all the flying cars we’ve seen in science fiction, the vehicles we’ll be seeing in the foreseeable future will be more reminiscent of giant drones or helicopters.

Futuristic science fiction tends to play with our illusions. And in this sense, flying cars are no exception. The flying car concept that we’ve been sold has always been the one all of us pictured: traditional cars that could “simply” fly instead of driving down a highway. And someday we may be able to reach this milestone in terms of form and propulsion, but the reality of today’s projects appears to be more like helicopters or drones than flying cars in terms of form.

These are the so-called VTOL, vehicles that can land and take off vertically and that are starting to be more and more well-known as time goes by because the projects are either taking shape or are getting near to being commercialized. However, unlike electric cars and autonomous cars, it’s going to be a long time before we see this segment popularized. Especially because of price, but also because of legislation. 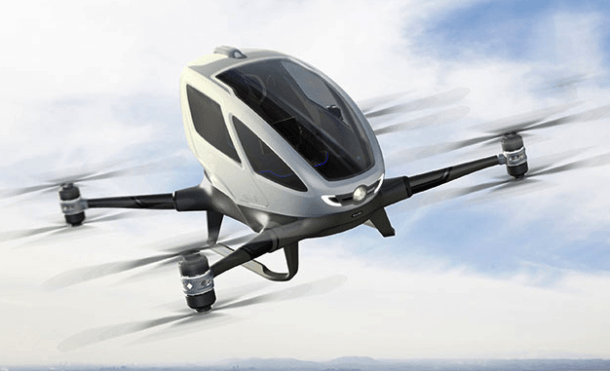 One of the most well-known projects is the EHANG 184, an autonomous aerial vehicle (AAV) that, according to its creators, is not just a bigger drone. It works with an electric engine and uses four motors with a total of eight propellers, to fly. Because it has to have long-lasting autonomy, this type of vehicle has a contained weight which, in this case, is approximately 440 kilograms.

As for security, its fail-safe system is very interesting because it lands in the closest and safest area as soon as it detects a problem in a component. In its presentation, its creators announced a modest speed of 96 kilometres per hour and an autonomy of 16 kilometres. The price tag will be between 200,000 and 300,000 dollars.

Another one of the most expected models is the TF-X by Terrafugia, which has been talking about the product for many years and whose prototype has already flown but is far from being commercialized. The brand is talking about a 2021 launch date with a price tag of 300,000 dollars. It has an autonomy of 800 kilometres and an announced speed of 320 kilometres per hour with a 1 milliwatt power engine.

As for size, according to Terrafugia, it will fit inside a traditional car garage.

As we see, we still can’t talk about solid projects or projects that we can place too much hope in. However, advances are happening and these will continue to speed up, just like drones themselves, as time goes by.

DARPA and its ambition to combine humans and machines