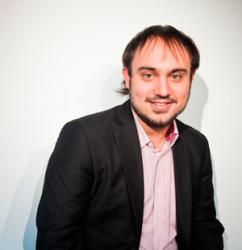 Were it not for eight “traitors” who abandoned the father of the transistor to start their own company, the place we know of as Silicon Valley may never have existed. The roots of most of today’s tech giants can be traced back to Fairchild Semiconductors, the company that invented the integrated circuit.

An American physicist called William Shockley, a Nobel prize winner, worked in the middle of the last century in the mythical Bell Laboratories. There he worked alongside technology pioneers like Claude Shannon – the man who built the bridges between logic and computing -, and who went on the become one of the fathers of the transistor, the base for the integrated circuits (chips) that are at the heart of nearly all the electronic devices that we use today.

In 1955, this pioneer decided to leave Bell to start his own company , Shockley Semiconductors Laboratory, in his home town of Palo Alto (California), in the area that we know today by the name of Silicon Valley. When it came to building a team, he tried unsuccessfully to recruit ex-colleagues from his old job. Nobody wanted to join him on his adventure, so he chose to look around the universities for promising students. Shockley had a good eye, and managed to build a genuine ‘dream team‘ of young, talented engineers.

He was also, unfortunately, a bit strange, an eccentric character whose methods for running the company soon resulted in eight of those geniuses (known as ‘the eight traitors of Silicon Valley’) to jump ship in 1957 to found Fairchild Semiconductors, the company that would be the true driver of innovation and the main reason for the industry to take off in these cities close to San Francisco that we know today as Silicon Valley.

Recent research by Endeavor Insights has revealed the real importance of the company founded by the ‘eight traitors’: Julius Blank, Victor Grinich, Jean Hoerni, Eugene Kleiner, Jay Last, Gordon Moore, Robert Noyce and Sheldon Roberts. According to the authors of the study, “if the value created by Fairchild was measured in today’s dollars, the company could be the first ‘startup’ worth a trillion dollars in the world”. No small matter.

The legacy of Fairchild, the company that brought out the first computer chip, can be traced to nearly all of the present day giants of the technology industry: Apple, Google, Facebook, Yahoo… Those eight pioneers laid the foundations, trained engineers and provided the financing required to light the match that resulted many years later in the computing boom , the Internet and even social media. All of it (or nearly all) came from Fairchild.

When Fairchild was founded, at the end of the 1950s, the towns that would become the Silicon Valley we know today were utterly different: there was no risk capital, no startups breaking the mould of what had gone before… There weren’t even any well-trained engineers ready to hire. At that time the neuralgic centres of the budding semiconductor industry were in cities like Boston or New York. 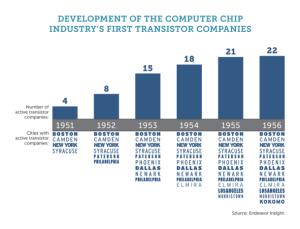 It was there that Shockley found the group of bright sparks who would turn out many years later to be ‘traitors’. Last, Noyce and Roberts graduated at MIT, in Boston; Kleiner and Blank lived in New York and Hoerni and Moore worked in Caltech, the research centre near Los Ángeles that was made famous through the characters of the series The Big Bang Theory. Only one of the eight co-founders of Fairchild, Victor Grinich, had graduated from Stanford.

Even so, despite their obvious disadvantages compared with competitors in other states, this group of entrepreneurs managed to stand out in record time. The annual profits of the firm reached 20 million dollars in only three years. In the mid 60s, when their revolutionary integrated circuit went on sale, their income from sales were around 90 million dollars a year. This was only the beginning. 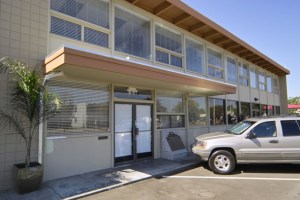 The former Fairchild headquarters with its commemorative plaque at the entrance. Credit: Wikipedia Commons

As the company grew and its coffers began to fill to overflowing, the co-founders of Fairchild and some of its employees began to support and even start new businesses that also took off at great speed, creating a curious cascade effect. The tentacles of the firm that invented chips stretched out and shaped the embryonic electronics sector in the area around the San Francisco bay.

The most famous of these new developments was led by Gordon Moore and Robert Noyce, who founded Intel, which would become the giant of the micro-processor industry. Its main competitor, AMD, was also the product of the money of one of the eight ‘traitors’. And there were many more.

In only 12 years, according to the research by Endeavor, the Fairchild group embarked on over 30 business projects directly, and invested in many more. In 1970, the computer chip business was employing 12,000 people in the region. And that is how Silicon Valley was born. 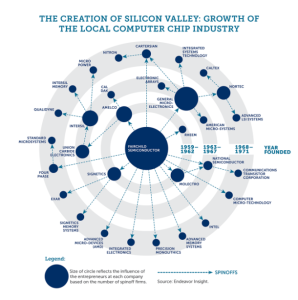 It was a journalist, Don Hoefler, who came up with the name in 1971, in reference to the enormous number of silicon circuit manufacturers that sprang up around the valley stretching south from San Francisco. Nearly all of the companies that the ‘founder’ of the Silicon Valley title mentioned in his article were linked in some way to Fairchild or one of its eight founders. It could not be an accident.

At around this time, a youngster named Steve Jobs started to develop an interest in computing. That hippy-looking kid  loved to spend hours and hours listening to the lectures of a master entrepreneur called Robert Noyce. He picked up many of the tricks of the trade from him. Later, Jobs and his friend Wozniak founded a computer company with the name of a fruit thanks to the support of a first investor who, funnily enough, had worked at Fairchild. And so we arrive at Apple and the computer boom of the mid 1970s.

But it turned out that there were other senior managers at the pioneer company who were looking forstartupsto invest in, and they decided to convert their hobby of financing projects into a profession. This was the source of some of the first and most important risk capital firms of Silicon Valley, which included Kleiner Perkins (who invested in Amazon and Google) and Sequoia Capital (LinkedIn, Airbnb, Dropbox, WhatsApp…). The tentacles continue to spread out from there to extend to nearly all of today’s technology sector.

Specifically, of the 130 listed companies based in Silicon Valley that Endeavor analysed, 70% had roots that went back to the co-founders or employees of Fairchild Semiconductors. If we add the value of all of them together, according to the authors of the studio we would obtain a sum of more than two trillion (million millions). This is considerably more than Spain’s GDP (even when boosted by including prostitution, drug trafficking and other shady businesses). 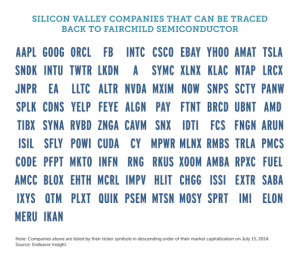 This does not include the companies that are not listed or which were bought by some of the companies above. All in all, the researchers were able to establish links between the silicon chip pioneers and 2,000 companies that range from Instagram to Nest, including YouTube, Pixar and Palantir.

Can anyone really claim that it didn’t all begin at Fairchild?

Meet the entrepreneur whose smart bench could make our cities cleaner 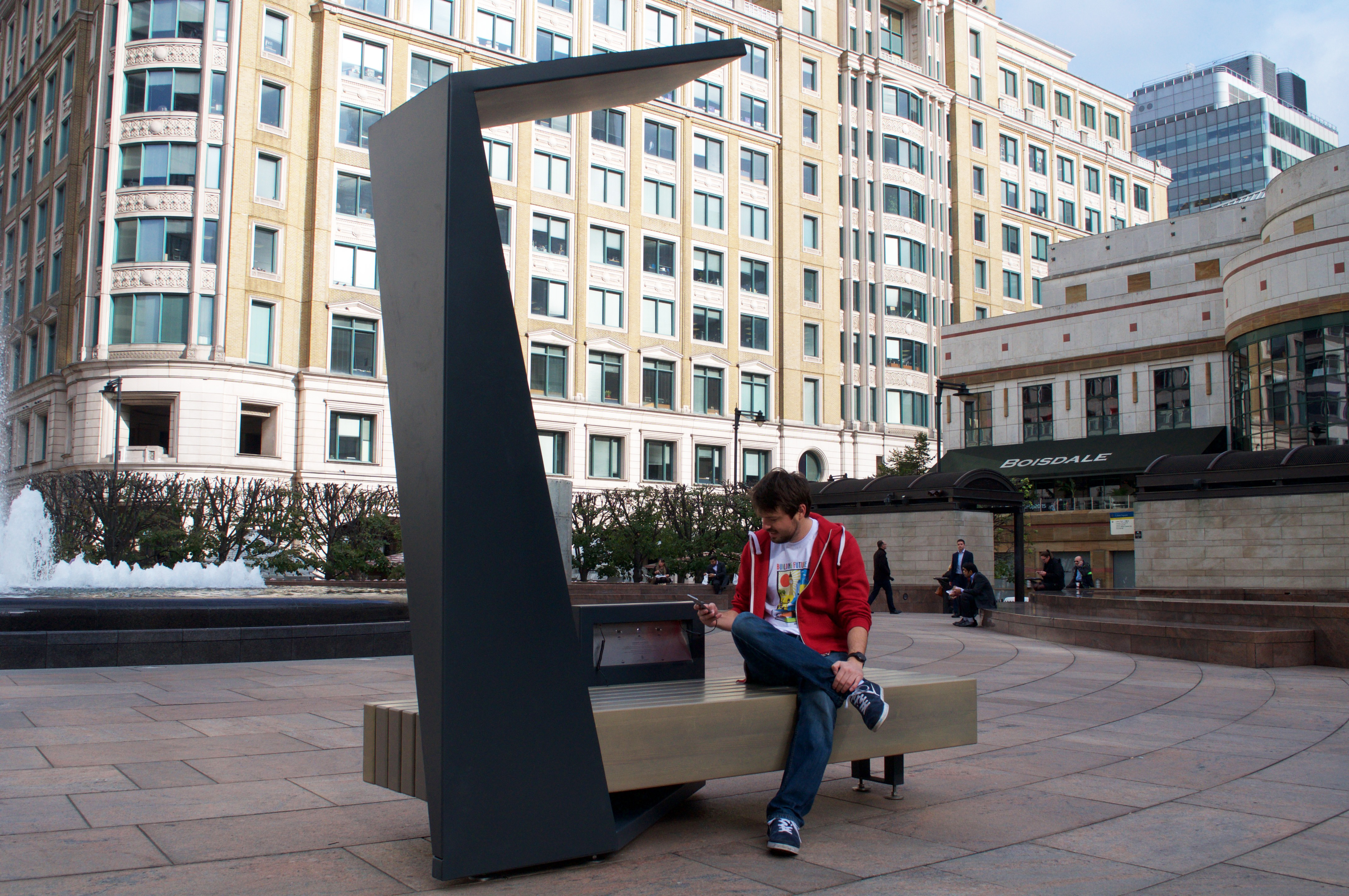