More efficient and productive, they take up less space and consume less water than a traditional farm

You will have already heard that the world’s largest vertical farm will have a crop capacity of roughly 6,500 square metres. Located in the United States, it will be able to produce about 1,000 tons of green leafy vegetables a year. What is known as vertical agriculture has every chance of becoming the most popular and widespread type of farming within a few years.

This form of growing crops, adapted to the needs of an ever-growing world population, is the evolution of one of the oldest activities conducted by human beings. Vertical farms like this have the ability to be ten times more efficient than one which is of the traditional kind. 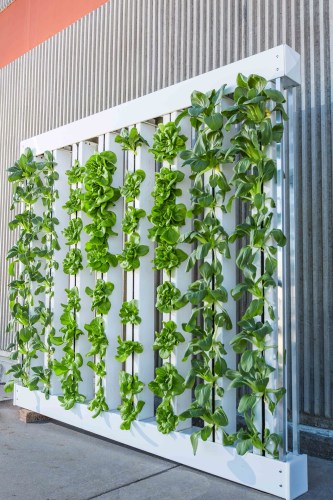 The world population is expected to reach the huge figure of 11,000 million by 2100. Which poses both a logistical and an administrative problem. Given that the higher the population, the greater the amount of food that has to be produced, we also have to take into account the factor of space. The surface area of arable land has declined over the years in favour of urban terrain which is more productive in financial terms. For this reason, vertical farms comply with the concepts of efficiency, productivity and less space for the activity, at least horizontally speaking.

These vertical crops will enable us to dispense with the obligation to farm land divided into fields, thereby opening the way to taking over cities as centres of production. Urban crops, which combine indoor plant and hydroponic crop techniques, open up an endless number of possibilities in the years to come. Lamps with blue and red lights create the optimum conditions for growing vegetables. One example of the above is the farm in Waregem, in Belgium, which has the capacity to grow about 220 lettuce plants a day with only 5% of the water required for a normal agricultural field. Which, given the climatic conditions and droughts we are faced with around the world, is an added value.