Renegade is a pen capable of printing in 3D, but it has a special feature: the plastic used comes from the homemade recycling of bottles, bags and other types of packaging.

Renegade has a double mission. On the one hand, it is a pen which can print in 3D –there have been products of this type for some years, though this does not make its technology any less appreciated – and on the other, the product includes a method for recycling plastic bottles and other wastes made of this material. The ambition of the project’s creators was to connect these two points.

The result is a product – currently seeking funding on Kickstarter – which allows us to transform the plastic of bottles and other waste in a homemade way into a material which can be used by the 3D pen.

This is the basic concept of Renegade, which is composed of two elements: the 3D pen and a shredder that transforms plastic from waste. The process for transforming the plastic of a bottle into useful material for drawing in 3D starts by heating the bottle. Once a little heat has been applied, the next stop is to place it on the shredder (which is, incidentally, decorated with a disturbing smiling face, though this detail is another issue entirely). 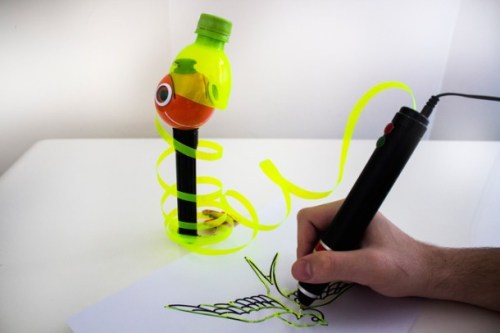 The shredder breaks down the bottle into strips of between 5 and 7 millimetres, which the pen can use as material. To draw in 3D you introduce a strip directly into the top of the pen, and when it nears the tip of the pen, it warms up and becomes soft, so that the thread comes out fused to the tip.

One of the limitations of Renegade is that it depends on the bottles you have available. Therefore, the colour –and the quantity of material – are limited. Although it is true that the purpose of the product does not seem to be to become a means for doing complex creations in 3D, rather to be a way of taking advantage of the plastic waste (mainly polyethylene terephthalate, which is very present in different forms of packaging) generated by households.

In any case, the creators have allowed for their 3D pen to use filaments that are not commercially available. For the time being, Renegade (along with its shredder) can be purchased from Kickstarter for 75 pounds, and it is expected to appear on the market in 2017.

It is worth remembering that the device that made 3D pens fashionable was the 3D Doodler pens, which also started in the portal of Kickstarter crowdfunding.